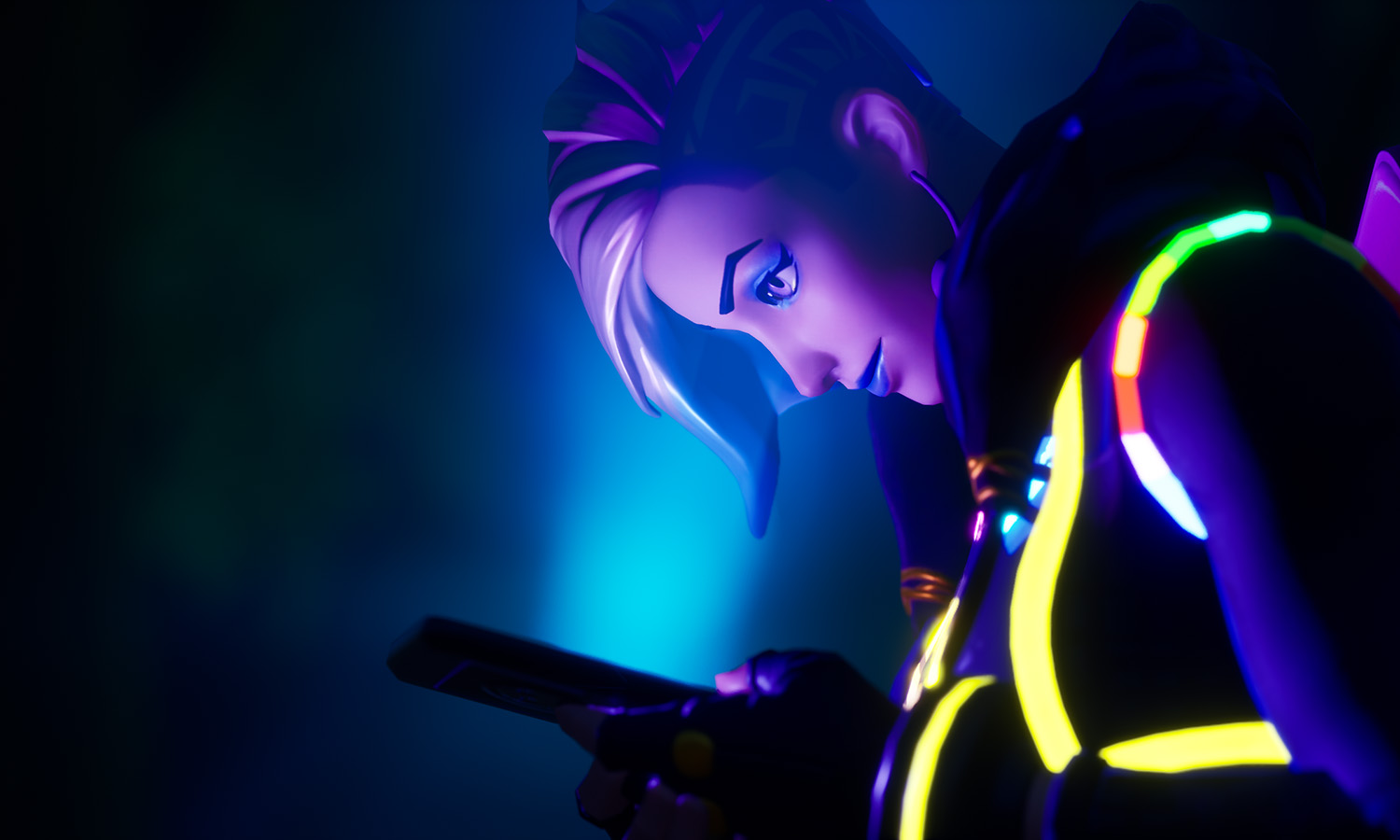 The influential avatar artist and curator LaTurbo Avedon has created a new work for Virtual Factory, a series of online commissions by leading international artists, inspired by The Factory, the landmark cultural space being built in Manchester, UK, which will be Manchester International Festival’s (MIF) future home.

LaTurbo’s digital intervention Your Progress Will Be Saved takes place in a reimagining of The Factory, which has been built on an island in the global gaming platform Fortnite Creative. Designed in the real world by international architectural practice Rem Koolhaas’ OMA, under the direction of OMA partner Ellen van Loon, it is believed to be the first major cultural building to be recreated in Fortnite, and the first to be launched in virtual space before it opens in the physical world.

LaTurbo’s work plays with and deconstructs our ideas about identity, authorship and the conventions of artistic practice. Much of Your Progress Will Be Saved deals with mirrors, taking visitors on a constantly evolving journey through shifting spaces, across illuminated dance floors and into private booths experimenting with and blurring the distinctions between what we call the real and the virtual worlds.

Gamers and non-gamers will be able to experience Your Progress Will Be Saved, which is free to try by playing the full game in Fortnite Creative, choosing their own adventure in an adapted journey on the Virtual Factory website and taking tours of LaTurbo’s intervention on Twitch.

LaTurbo Avedon says: “You begin to see reflections throughout the Virtual Factory. From the memesis of the installed works and locations, down to noisy reflections from the game engine itself. As much of the world grapples with a cultural moment of immateriality, Your Progress Will Be Saved shines back the close-yet-far tension of being alone online, together.”

Virtual Factory underlines the digital ambition that is a cornerstone of the real-world Factory. With LaTurbo Avedon leading the charge, the artists commissioned for the Virtual Factory series, have built reputations through very different artistic practices and offer commentary on the political, social and philosophical issues of the day.

Each artist is being invited to respond to, reconfigure and play with the different elements of the building, including the architecture, the people and the history of the site. Through augmented reality, interactive and mobile gaming, film and social media, Virtual Factory aims to imagine and create work that harnesses these new creative landscapes as spaces of infinite possibility.

Your Progress Will Be Saved opens today (Wednesday 1 July) and runs until the autumn. Subsequent commissions will be released over the next year, including a new project by the British-Nigerian artist and director Jenn Nkiru, whose global reputation was cemented by her work on Beyoncé and Jay-Z’s Apeshit video; the New York City based game developer and professor of video games, Robert Yang, whose work often focuses on gay men, intimacy and queer spaces; and the British artist Tai Shani, whose work encompasses performance, film, photography and sculptural installations and was one of the joint winners of the Turner Prize 2019.

MIF began developing Virtual Factory in 2019, as part of its pre-Factory programme on the journey towards The Factory, where artists will be encouraged to create radical and interdisciplinary work that maximises the boundless potential of the highly flexible spaces within the building and the expanding digital spaces beyond its structure.

Gabrielle Jenks, Digital Director at Manchester International Festival, says: “Virtual Factory reflects a time when we are increasingly inhabiting non-physical environments, from social media and virtual reality to live-streamed theatre and videogames. These artists through their distinct practices construct worlds through computer games, cinematic tools and augmented reality. They are creating work for a building that hasn’t opened yet – alluding to the reconfigurable shape of things to come and sending out a message that The Factory will be open for everyone to re-interpret and re-use.”

Mark Ball, Creative Director for MIF and The Factory, adds: “The Factory has always been an invitation to artists to make bold and radical work, whether that’s within the walls of the building, or the virtual spaces we create around it. So it’s thrilling that the very first work to be created for it is by a virtual artist within one of the world’s biggest gaming platforms for our Virtual Factory programme. LaTurbo Avedon’s project does everything we need The Factory to be: a place where new artistic forms and experiences are created, played with and enjoyed by richly diverse audiences.”

Talking about her commission, Jenn Nkiru comments: “As a country, our relationship to the North is one that has always felt fractured and incomplete. Architecture, when in its most useful form, disrupts this — it is body and soul; it brings a sense of rootedness, completeness, progressiveness and prompts us to question, interrogate and enjoy.

“With Manchester and our site, The Factory, as the focus, these are all ideas I intend to speculate in abstraction within a film. As an artist, I’m excited to be in visual conversation with the architects and to explore how a coalescence of our philosophies will realise itself within this special project.”

Architect Ellen van Loon states: “From the outset, we have designed The Factory with the goal of stimulating exciting innovations in the arts. Virtual Factory reinforces the strength of The Factory as a versatile and flexible platform for experimentation in the cultural scene.”

Whilst preparing for Virtual Factory, MIF has also been supporting Greater Manchester artists to develop work online during the lockdown, through initiatives such as Festival in My House and Yours and Remote Residencies. MIF supports local artists and makers year-round and during the Festival, through other programmes, including Creative Lab, which offer the opportunity to develop their skills and digital practice.