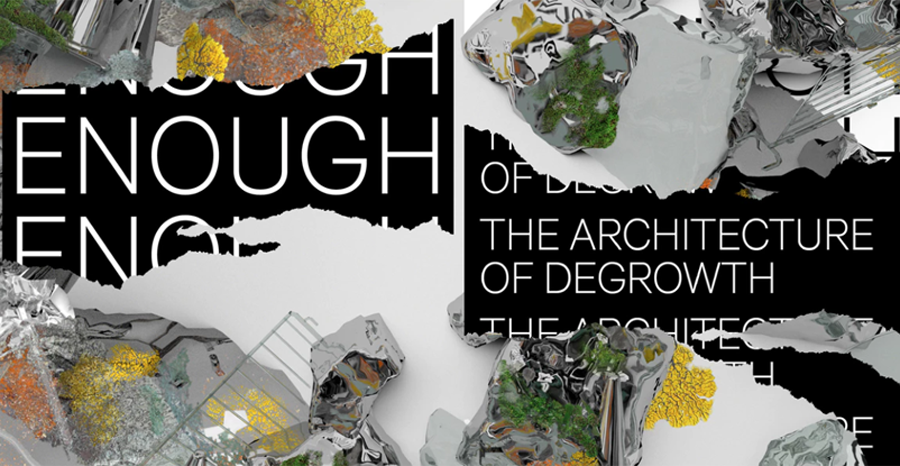 ENOUGH: The Architecture of Degrowth

Around the world campaigners, cities, and governments are declaring a state of emergency in response to accelerating global warming. Meanwhile systemic inequality continues to entrench deep divides between those who have far too little, and those who have far too much. In this unprecedented moment, an urgent question is cast into relief: how should architecture respond to a time of climate emergency and social division?

For the last two centuries, the engine of architectural production and the basis of societies around the world has been the pursuit of economic growth. The desire for infinite growth has forced aside common and ecological goals measuring acts of culture and community as mere bumps in GDP. Yet the limits to this paradigm have become abundantly clear. As equity, wellbeing and non-monetary measures of prosperity falter, rising sea temperatures, extreme weather and other indicators of climate breakdown converge on the conclusion that the days of growth’s predominance are running out.

Architecture is no exception. The promise of a meaningful life’s work harnessing the transformative power of design to mix beauty and social justice is deeply felt. Yet for many, our daily practice looks very different to the work we aspired to. The majority of urban practitioners are not the agents of social change they might have been, but cogs in a vast value-producing machine whose hunger for expansion is never abated. Homes have become vehicles of capital speculation, galleries have become billboards for attracting investment, streets have become the infrastructure of consumption, universities export enlightenment for profit.

In our bones we know that infinite economic growth is impossible. We know that money cannot buy happiness. We know that change is coming. Yet our professions continue to toil at the coalface of economic expansion cultivating consumption in pursuit of a prize that is never enough.

Enough: The Architecture of Degrowth responds to an era of climate emergency and social inequality by proposing alternatives to the unsustainable and unfair paradigm of growth. The festival explores the architecture of Degrowth, an economy of shared plenty in which human and ecological flourishing matter most. It is time to call time on too much for the few and too little for the many.