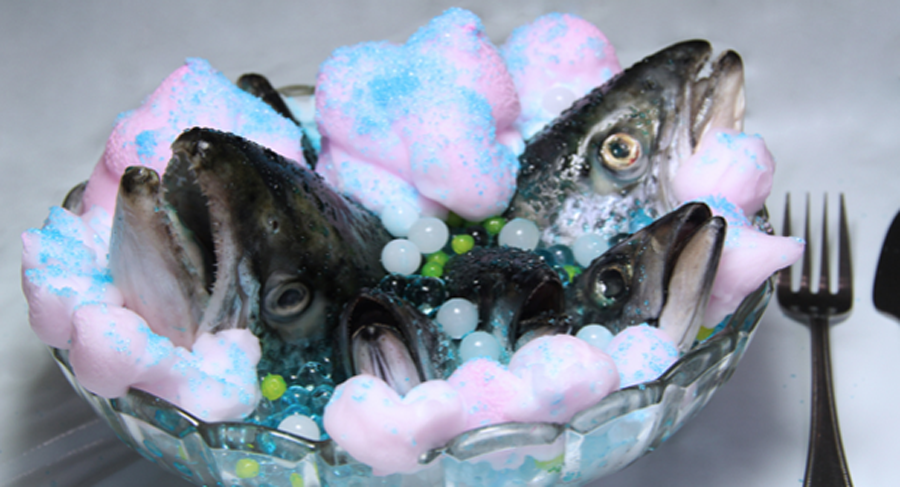 Hints at the future of food

Technology has long influenced what we eat and how we see food; the appearance of our diet is often just as important as how our food tastes, but what is the future relationship between technology and food and what might it evolve into?

One London design studio, Burton Nitta, is critiquing the potentials of culinary endeavours and how speculative design projects can give us insight into the future of food.

‘Burton Nitta’ consists of designers Michael Burton and Michiko Nitta who met and began their career at the Royal College of Art. For 8 years the pair has created a range of speculative design projects including Algae Opera House and The Abandoned Biobot, which speculate a dystopian future filled with wondrous and weird technologies. Burton Nitta’s work is an example of how design has gone beyond solely focusing on product aesthetics and instead focuses on problem-solving approaches which can be used by a wider audience

One of their latest projects- Food Fictions provides a window into our future relationship with food, and the possibilities of what technology might result in. Food Fictions is a collaborative project with King’s College London and explores how technology and social media alters our behaviour with food: from our political views to how we define ourselves by what we eat.

‘Lunar Potato’ is the second course which investigates how food narratives are influenced by politics. Inspired by the photo of Theresa May eating a chip on the street, BurtonNitta explores how potatoes have been used to connect with a wider demographic and how subliminal political messages can be conveyed by using certain foods.

In China, scientists have launched a lunar mission to grow potatoes on the moon to see if the food could sustain a future human colony. ‘Lunar Potato’ envisages the foods created from the first potato crop grown on the moon and critiques the politics of such endeavours.

The third course is ‘Vegan Bodybuilding’ which explores bodybuilders’ alternative diets. The project is an interview with personal trainer and vegan Ondrej Matej who asserts that a vegan diet for bodybuilders  improves mood, increases muscle mass and makes the body leaner.

‘Stellar Meat’ is the fourth course which investigates the impact of biotechnologies such as CRISPR on our past and future relationship with what we eat.

In 1741 the stellar sea cow lived on Commander Island and having got a taste for its almond-flavoured meat, within 27 years humans had made the animal extinct . Burton Nitta’s Stellar Meat course suggests that biotechnology might allow an opportunity to grow and taste foods that were once eaten pre-extinction.

These proposals, otherworldly as they are, equip us with an understanding of how speculative design allows us to see how technology influences everyday habits such as our diets. In particular, critical design projects like Burton Nitta’s Food Fictions give insight into how the creation of fictional scenarios help designers fabricate potential future experiences.